Well, I got in late last night. We hiked in 1.5 miles to work on the west flank of the Warm Springs fire near Mt. Jefferson. We worked until 6 and then hiked back to the rigs, and then hauled tents and camping supplies up a trail several hundred yards and set up a spike camp just before dark. The wind was blowing strongly and the camp was in some trees. To get there we had to walk through a bunch of burning trees. 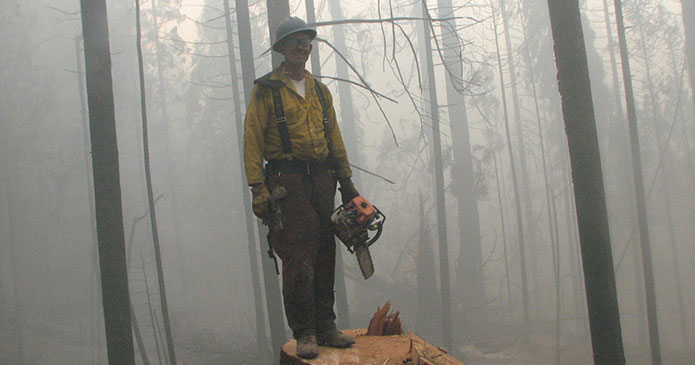 Walking out the trail, lugging my gear back down to the rigs it was almost dark. The fire had picked up quite a bit and it was awesome. Flaming snags were glowing in the dark and throwing sparks out like a sparkler on the 4th. We had to drive down the 4 wheel drive terrain several miles through burnt timber and fires on both sides of the road. Hardly needed our headlights. Fire at night is impressive. The rough Indian roads have dust 6 inches deep. I was Baja Buggying with my F-250 at the extreme speed of 15 mph and dust demons were rolling up from my wheels and peering in my driver side window, only to dissolve and fall back away. A wave of heavy dust would roll up over my hood like ocean surf. It was hard to see the road for all the smoke and dust. Smusk.

I finally made it home by 10:30pm to hit the sack and then up and back to briefing by 6 am this morning.

Now here’s a story for the grand kids! Haha.